WugulOra meaning - One Mob - A time for inclusion, understanding and reconciliation – a sacred and reflective start to Australia Day. 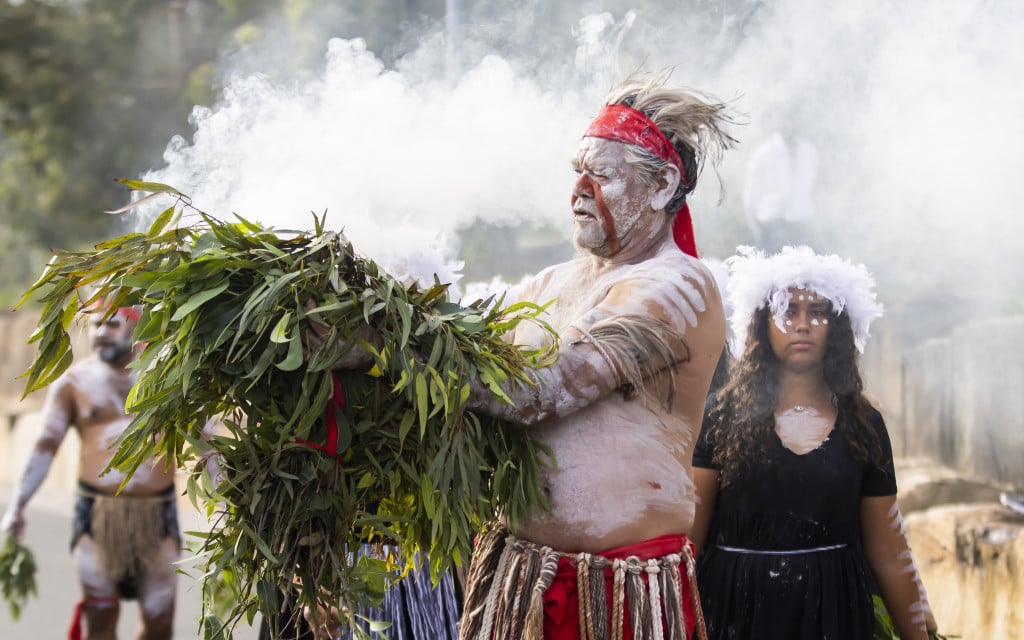 The WugulOra (one Mob) Morning Ceremony at Barangaroo Reserve is a reminder that Australia’s First Nations people are the foundation of Australia’s story and caretakers of the world's oldest continual culture.

Every year since its inception in 2003 (when it was called woggan-ma-gule), the ancient smoking ceremony cleanses the way for new beginnings and celebrates the Gadigal people of the Eora nation through music, dance, language, story-telling and ceremony. The 2022 event was also broadcast live on ABC TV and streamed on iview which you can watch here.

There were special performances by Aboriginal and Torres Strait Islander dancers and singers, including the Koomurri Aboriginal Dance Troupe and the national anthem sung both in English and Eora, the local Aboriginal language.

This ceremony and much of the Sydney program is guided by First Nations representatives and features many First Nations artists showcasing the richness and historical significance of culture through modern and meaningful performances. The event is also co-curated with the Metropolitan Local Aboriginal Land Council (MLALC).

First Nations Australians are the foundation of our nation’s story and continue to maintain the world's oldest living culture.

Each year as the sun rises on 26 January, we remember to:

WugulOra is a free event open to the public. Everyone is welcome to attend this unique event, so if you haven’t experienced this symbolic event before, make sure you plan to attend in 2023.

The WugulOra Morning Ceremony is always held at Headland Stage, Barangaroo Reserve. Barangaroo is named after a Cammeraygal woman, who was a powerful leader of her people at the time of European colonisation. Her story is an important and empowering part of our shared history – not only for First Nations Australians, but for the entire nation.

This ceremony is supported by the National Australia Day Council, which is assisted by the Australian Government.

About the Smoking Ceremony

The Smoking Ceremony flame recognises the survival of the world’s oldest culture. Lit on Me-Mel (also known as Goat Island), the flame burns through the night and then travels to Barangaroo on 26 January.

A Smoking Ceremony is an ancient ritual where native leaves are burnt to produce smoke. Depending on the leaves used, the smoke:

In the video below, Uncle Max Harrison (a Yuin Elder) and Dean Kelly (a Yuin man), talk about the meaning and significance of the Smoking Ceremony.

Aboriginal and Torres Strait Islander people should be aware that this website may contain images, voices or names of deceased persons in photographs, film, audio recordings or printed material.

History of the WugulOra Morning Ceremony

The WugulOra Morning Ceremony has been a special feature of the Australia Day in Sydney program since 2003.

At the heart of this ceremony is the communication of culture through music, dance and language.

Its first iteration, as the Woggan-ma-gule Ceremony, was staged in the Royal Botanic Gardens Sydney from 2003; and continued until 2012.

It was renamed WugulOra, meaning ‘one mob’ and moved to the northern boardwalk of the Sydney Opera House in 2013.

Since 2016, the WugulOra Morning Ceremony has been held at Barangaroo Reserve and televised nationally.

The NSW Government partners with the Metropolitan Local Aboriginal Land Council to ensure content, messaging and representation is appropriate.