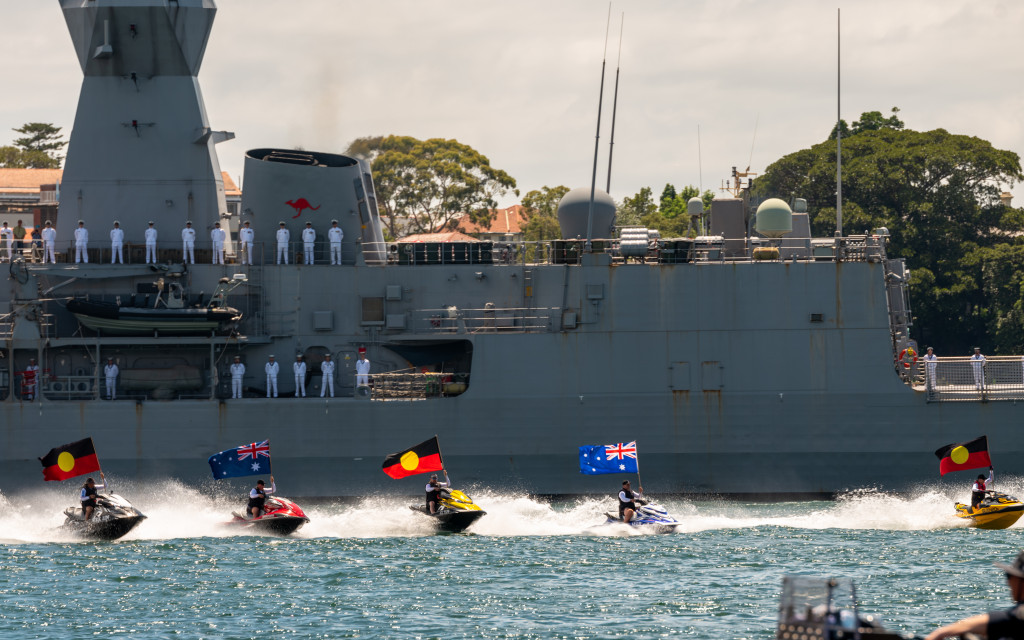 At first light, First Nations artwork by acclaimed Western Desert artist and elder Yadjidta David Miller was projected onto the sails of the Sydney Opera House. Many people came out to experience this reflective and significant moment while the normally busy Circular Quay waters were still and the national Australian and Aboriginal flags were raised atop the Sydney Harbour Bridge for the whole day.

The busy and vibrant harbour program led with the iconic Ferrython, Tall Ships Race, Harbour Parade, longstanding Australia Day Regatta and 21-gun salute on the dot of midday as part of Salute to Australia. The Salute ceremony included an impressive Navy ship positioned off Hickson Road Reserve while the Governor of NSW conducted a citizenship ceremony and the military band played to guests and the public.

Australia Day 2022 was the perfect Sydney summer’s day for Harbour Parade entrants with vessels dressed to impress while those lucky enough to score a ticket on one of the Emerald Class ferries for the Ferrython enjoyed the on-water activities up close.

Crowds gathered at vantage points around the harbour to cheer on those participating in maritime events and be thrilled by the giant Australian Flag under tow overhead, thanks to a Navy helicopter, and the twists, turns and roar of the F-35 aerial acrobatics which entertained crowds for at least 10 minutes.  Adjacent to the Overseas Passenger Terminal a new Maritime Mayhem event, described as ‘Monster Trucks on water’, took the program into fifth gear!

Video of the Ferrython thanks to Transport for NSW.

The finale of a full daytime Sydney program was Australia Day Live which spanned Circular Quay both on land and water with more maritime antics including jet skiers, fly-boarders, a world champion wake-boarder and parachutists dropping in trailed by multi-coloured smoke.

The fireworks crescendo matched the climax of an epic final performance with some of Australia’s best musical artists on stage at the Sydney Opera House forecourt. For the concert audience and thousands more lining Circular Quay’s foreshore, plus those enjoying the sights and sounds from the many bars and restaurants in the busy precinct, a megamix of Aussie rock songs and Advance Australia Fair sung in both English and Eora brought the outdoor concert to a spectacular close.